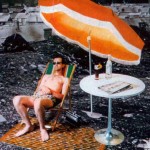 For those of you who have the same, rather bad, taste in music as me you might remember the Supertramp album from the 1970s with this title, referring to a man staying cool in a crisis.

Following on from a recent post on banks and the cloud, I wonder if we could take this title as a state of play for the banking industries take on the cloud. Are the banks sitting there saying, “I am regulated, so cannot change safely”, are they saying “I am so big I have already achieved economies of scale”, or, like the man on the album sleeve, are they just carrying on regardless, ignoring the problem? Whatever happens within these institutions,
I believe if they keep their heads in the clouds, they risk finding themselves in the middle of a desolate wasteland of defunct technologies.
As always, the truth of where they really are is certainly somewhere in between the extremes: some clearly are playing at the edges, some embracing some form of change pro-actively  but huge numbers simply ignoring the truth of what’s happening and just reacting when required. We all know the change is already on the horizon, and is approaching like a lumbering juggernaut.
As is eloquently pointed out in this post, every bank is already using the cloud, they just don’t consider that they are per se. In all sorts of financial institutions, the front office is buying software as a service (SaaS), almost every department is consuming tools that are on the web, data is spreading into the cloud whether the bank likes it or not – so change is inevitable. As with the change when centralised controls of the mainframe gave way to the Unix departmental computing revolution; as with the change from this model to the individual purchase of PCs and software when central IT took over the departmental computing. Also the individual purchase of software services as business services direct from cloud enabled vendors is happening and is inevitable. The enlightened IT departments in banks will embrace, track, de-risk, and enable this change, the unenlightened will sadly ignore, or worse still try and constrain or over-regulate the cloud. Surely it would be far better to accept and plan for this change pre-emptively, than build a brick wall in front of the problem, knowing it will inevitably tumble down due to the inevitable impetus for change.
Tweet